Skip to content
By ryanhoffmanJune 11, 2017Learn Explore Expand Your Being Must see Cape Town South Africa Travel Resources Travel Tips1 Comment on A little flashback from my trip to Cape Town

Cape Town V&A Waterfront; it is normally open but when there is a strong wind blowing they close it for safety reason and I suppose to stop people getting sea sick ?.  Oh well, the walk was refreshing, all 7km of it, the weather was great and my UK translucent skin was bronzing under the African sun.  The views from where the cable car starts were fantastic, at the top must be even better; next time I will plan things better and even if the winds are strong I’ll make plans to hike to the top.  I walked back to the hotel following a different route and ended the day doing 15km – an odd way to explore but I like it. On a different day I got lost again found Green Point Park, what a beautiful spot if you looking to relax and maybe have a pick nick or just lounge about with friends lying on the grass. 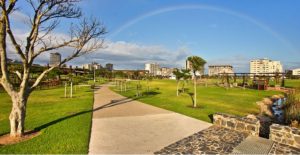 I spent a day in the city and had planned to do three things, Castle of Good Hope, District 6 Museum and the Slave Museum.  If there’s a Castle near to me you can safely bet that I will go see it, there’s something magical about them; a mix of mystery, magic, tragedy, history, war, violence etc. all on one building – what’s not to like!

The Castle of Good Hope

Such a disappointment, I left more frustrated than anything else.  In most parts of the world where I’ve gone to see castles there is a mix of information, theatrics and experiences.  Some may “milk” the touristy part too much but still utilises them as a source of income and in turn keep the place maintained and keep people coming. The Castle of Good Hope is a national key point in the heart of Cape Town and one of the oldest structures in the country and ashamedly maintained like a leper. I wouldn’t know where to start, the reception/ist are unwelcoming, unhelpful and seem loathed to be there, the place is dilapidated, signage in terrible (where there is), the list goes on.  What frustrated me the most was the missed opportunity but seemed more like those responsible didn’t care.  E.g. Four indigenous kings were imprisoned in the castle, they must have spent a lot of month for the four bronze statues (rightfully so) which are not even permanent fixtures but have not ridden the narrative of where they were imprisoned (some cells still exist) or even half told their story nor that of their tribes/kingdoms – all they have is a little plaque.  You can get more information from www.castleofgoodhope.co.za than actually going there, what a shame.  The only part I found interesting was reading the carving some prisoners had scribed into the wooded doors of their cells telling tales of their toil and strife in life and reasons why they were incarcerated – open to the elements and vandals, only a matter of time that these priceless pieces of history are damaged.  What a lost opportunity and sorry state to see such an historical building left to ruin.

I didn’t know anything about District 6 in Cape Town, I’d not even heard of it before let alone the story and history behind it.  I hate to think of all similar stories the country has and those that had to experience it.  I won’t get political, but the District 6 Museum is a must see, especially for white South Africans.  Uniquely, the tour guides here are all ex-residence of District 6, making the whole experience and tutorial very personal human journey and totally unexpectedly a fantastic mix of humour and self-reflection.  This story sadly is one of many in the country but this story is told and relived by the tour guides in such a manner that I have not experienced before.  Only a tiny museum however filled with emotions and touching stories delivered with oratory perfection by someone who is part of the history, present and future of what the museum represents and hopes to achieve.

Built in 1679 which makes it the second oldest colonial structures in the country is also a must see in my opinion (especially South Africans, maybe more so because I’m white).  I hesitated to go at first, I was reluctant to spend time being depressed, but knowing your own countries history warts and all is a good thing. Hardly depressing, I found it very informative and very interesting and left wishing it had more information display and stories told (not nearly like the Castle) – I suppose all the stories will never be told nor be able to either.  A journey through a bleak period of the world but specific to the country, illustrated with actual stories and pictures bringing to life and humanising deplorable stories in order to accurately reflect how the past impacts the present.  It may sound like a depressing museum, on the contrary I thoroughly enjoyed it, not for its macabre subject, more so getting to know my past and present which is the foundation of which the country is trying to build its future.

On another of my to and fro into Cape Town I stayed at the Happy Rhino Hotel, it’s cheap, clean and that’s all I needed so wasn’t expecting or needing more, literally around the corner from Long Street (the nightlife centre), perpendicular to be more accurate.  I got to the hotel late and was heading off early the next morning, the hotel recommended Mama Africa for dinner, less than 100m away.

Mama Africa was delicious and as I hadn’t booked a table was lucky to get in – very cool decour served with honest flavoursome African food in a stylish manner without forgetting it’s rustic origins.  Long street, well, a vibrant hip area which is a veil covering its true grunge underbelly.  I’m mostly quite liberal, being offered cocaine three times, once quite persistently in the space of 2 minutes and in broad daylight is pushing even for me! At no time did I feel threatened or unsafe so it wouldn’t stop me from going there again it was just the opposite “life” I had experienced not from away on the promenade.

I stayed a night Wish U Were Here (backpackers) in Woodstock, Cape Town; a totally different environment to the rest of Cape Town and more of  like a work in progress, an area of regeneration and where I’d like to explore further from what I saw even if very brief.  An odd backpackers with rooms of varying sizes and facilities, mine had an on suite bathroom I’ll let my pictures of the room do the talking (yes, the bed is suspended).

Woodstock is on the outskirts of Cape Town’s regeneration and is like an island surrounded by a different world.  The main road if filled with galleries, antique stores from retro to chic, old to modernist all at a very good price if you’re spending in Pounds or Dollars.  Coffee shops adorn every little mall and the coffee tastes amazing, the best I have tasted anywhere and I do love my coffee.  Everyone is friendly but you will see as soon as you leave the main area, just a quick glace up the streets you will see the different world far for the hip and shabby chic Woodstock is fast become known for.  It seems microbreweries are also dotted around, I wet my pallet a few time and will make exploring more of these breweries along with everything else Woodstock has to offer on my priority list when I next visit.  Of these breweries I had a nibble to eat at Devil’s Peak Brewery; in the setting of a gastro pub with food to match but a great variety of beers, I only tried three so it would be sacrilege if I didn’t return to try the rest…..not in one sitting!

I was warned by the backpackers and a cab driver that in the evening during the week it is best not to walk the streets especially alone and to rather get a cab.  Cape Town is, like a bag a liquorice allsorts!

For some more on my time in the Western Cape take a look at: