Skip to content
By ryanhoffmanJuly 19, 2017Learn Explore Expand Your Being Must see Spain Travel Resources Travel TipsLeave a Comment on Zahara de la Sierra, the white village in a backdrop of turquoise waters

Zahara de la Sierra is only about 23km from Ronda so I thought why the hell not!  There are two buses every day, one at 7:00 the other at 3:15 and returning bus at 7:45 and 14:15 with a one-way ticket costing just under €5.  I had booked my accommodation (more about that later) and then found out that the bus doesn’t operate on Saturdays and Sundays.  Rome2Rio is a great site and I have used it plenty, but I have found their pricing to be more of a “guideline”, they said a taxi would cost about €23, but the cheapest I could get was €45 – you live and you learn.

Zahara is quite a large area however the town is small, very small; it’s by far the smallest place I’ve been to with only one little grocery store and not even a pharmacy.  It does have a few restaurants, some trinket shops and two or three stores that sell fresh produce like cheese and meats.  You “I” went to Zahara for the views and the colour or the water, simple as that!

The town is built on a rock of a hill with steep winding roads, the roof tops bleached by the incessant sun turning the terracotta tiles a grey peach, with all the houses painted white except the old church at the Mayor Plaza which is marble pink, the whole town shadowed with the constant backdrop of the grey stone hill and its vertical edges leading to the what remains of the castle.

The castle was constructed in the 800’s with the tower, Torre del Homenaje built on the highest point (605m above sea level) and is the only structure fully visibly left.  It must have been an immense structure once completed as there are walls and remnants of buildings/structures everywhere.  Climbing to the top is pathed but steep but the views from the top of the tower are panoramic and the cool breeze lets you forget for a brief moment that your skin is frying.  You can climb to the top of the tower easily as there are the original stairs to what would have been the towers main lookout point.  Zahara de la Sierra had a strategic role as the final defence before invaders would get to Ronda.  I take my hat off to anyone who (and there were a few) would try to attack such a challengingly located strongpoint.  Never mind the vertical cliffs, the castle surrounded by aloes and cactuses/cacti and the weather is harsh…..it snows there in winter too!

For such a remote town, the old 18th century church Iglesia Parroquial de Santa Maria de Mesa is quite ornate inside with a baroque main alter and the nave now used as a little museum to display a substantially rich collection of memorabilia, regalia, historical documentation and artefacts.

For any ornithology enthusiasts, there are plenty of birds of prey, not only in Zahara, I say lots in Ronda too.  In Zahara there is a gentleman that keeps birds who cannot be released back into the wild and he has a beautiful collection of kits, falcons, owls and eagles.

I was beginning to think my body temperature was going to overheat, going back to my accommodation, extremely friendly people but the room had no air conditioning and the temperature never dropped below 30 degrees in the evening!  Luckily, I was told about La Platiya about 4-5km away; a man-made lake with is fed by the very refreshing mountain waters and is “the place” to be if you are a local and it is Summer.  Like a community pool only much bigger and filled with locals of all ages.  The water is “refreshing” aka quite cold but with 37 degrees what wouldn’t be cold!  It was exactly what I needed and wanted and could easily have stayed in the water for the rest of the day.  Ah yes, I hiked there so looked rather worse for wear when I got there…..and for some strange reason, I blame my sun burn brain, I hiked back! 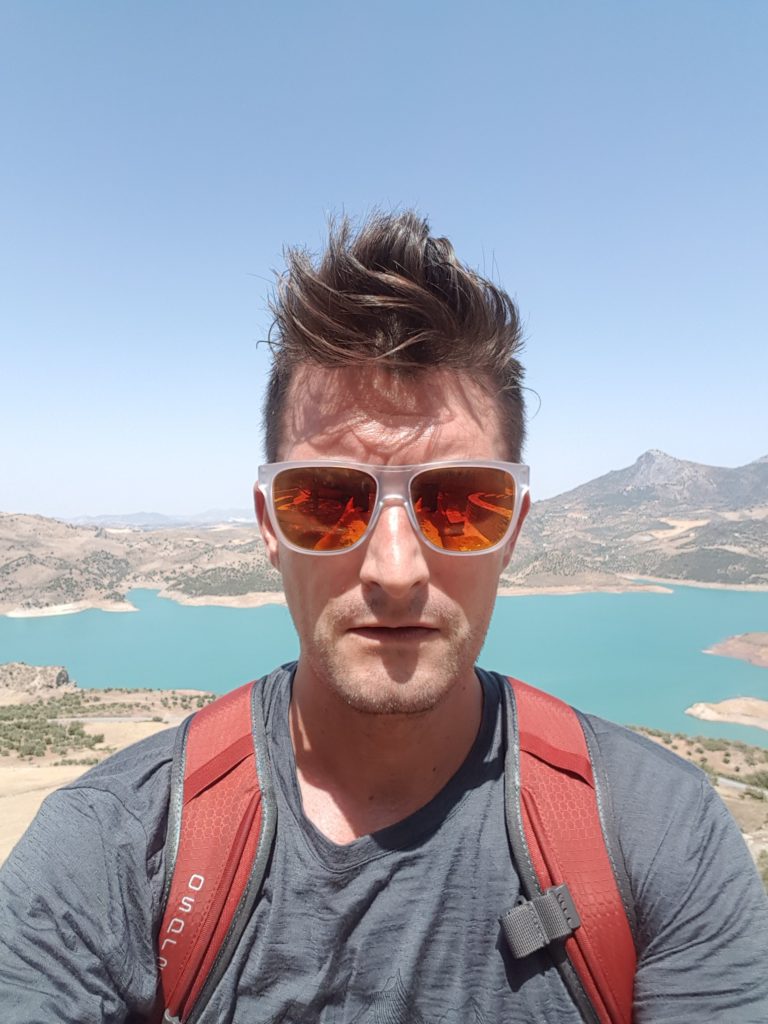 As I said in the beginning I went to Zahara because of the views and water.  The sun sets seem to last an age, the sun a deep orange casting the haze in the sky with shades of orange and yellow till it finally fades out behind the horizon.

Almost anywhere in Zahara you can see the lake, from the castle, roads and the colour makes to take a second glance every time.  Set in the valley surrounded by hills of olive plantations and dry grey stone is an enormous space of deep turquoise water, almost artificial in its setting.  The pictures don’t do it justice.

Just another little one of the town